Learn specific ways to attack some of the most common guards in the gi game with Felipe Pena’s advice for passing with a consistent technical flow and mounting pressure
Use positions like the outside De La Riva, inside De La Riva, lasso guard, spider guard, and more to your advantage with Felipe’s techniques for passing
Attack with combinations of knee slices, smash passes, leg drags, and more to create a constant passing threat against your opponent - just like Felipe has done throughout his competition career
Felipe Pena is one of the most successful black belts of his generation, with three black belt world championships in the gi including the 2021 IBJJF Absolute World Championship
These techniques and concepts can help you learn how to build pressure and passing combos over time to create a serious top game that controls and suffocates opponents
Join one of the greatest black belt competitors of all time as Absolute IBJJF Black Belt World Champion Felipe Pena shares his system for dismantling the guard with steady building pressure over time. Learn his effective “0 to 100” system across this 4-volume series aimed at destroying some of the most common positions in gi Brazilian jiu-jitsu, including De La Riva guard, lasso guard, spider guard, and more.
Felipe Pena is one of the most successful competitors and black belts of all time, with three world championships in the gi - including a 2021 absolute title before his retirement. Now you can learn from one of the greats of the sport as he shows you the inside details behind how “Preguiça” - Portuguese for sloth - slowly but surely increases the pressure until he is controlling even the most stubborn guard players and passing through the guard.
Focus on some of the most common gi positions with this “0 to 100” system, including the De La Riva, spider, and lasso guards. Use Felipe’s variations of passes like the knee slice, smash pass, leg drag, stack pass, and more to combine into a singular threat against talented guards that anyone can use to improve.
SO, WHAT EXACTLY DO YOU GET?
PART 1
INTRO
OUTSIDE DE LA RIVA PASSES
OUTSIDE DE LA RIVA PASS TO SIDE CONTROL
INVERTED KNEE SLICE FROM OUTSIDE DE LA RIVA
PASSING INTO QUARTER GUARD
PART 2
MIDDLE DE LA RIVA PASSING
LEG DRAG FROM MIDDLE DE LA RIVA
BONUS PASS FROM MIDDLE DE LA RIVA
PART 3
INSIDE DE LA RIVA
KNEE SLICE FROM INSIDE DE LA RIVA
SMASH PASS FROM INSIDE DE LA RIVA
SMASH PASS TO MOUNT FROM INSIDE DE LA RIVA
QUARTER GUARD TO SIDE CONTROL
PART 4
PASSING LASSO GUARD
LASSO HALF GUARD PRESSURE PASS
PRESSURE PASS VARIATION WHEN OPPONENT FACES YOU
STEERING WHEEL PRESSURE PASS
STAND UP PASS FROM SPIDER LASSO
SPIDER GUARD STACK PASS
PART 5
SPIDER GUARD PASSING
SPIDER GUARD STEPPING PASS
PUNCH LEG TO THE SIDE
SPIDER SIDE WALK BACK PASS
PIN LEGS DOWN
STACK TO DOUBLE UNDERS
OUTRO 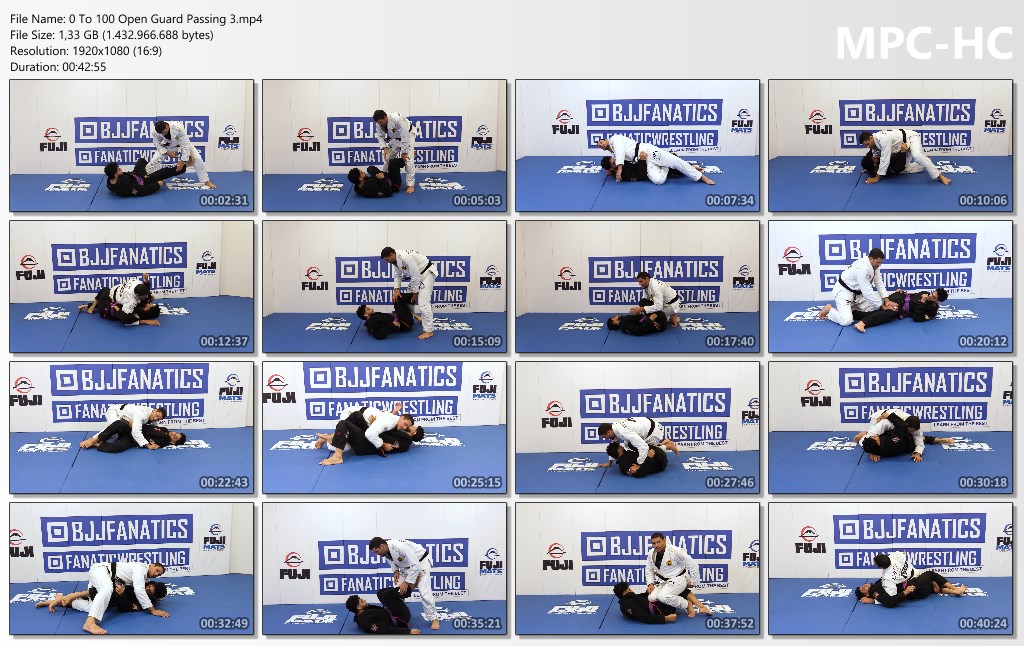