The Bolo Game was originally was originally shot as an "DBMA Instructor Only Vid-Lesson". Given the very small volume of sales attendant to such a limited size "market", we kept the production budget down by shooting outside in back of "Boxing Works"-- so there is some street noise as part of the audio track.

Why have we kept this material "closed door" for all these years?

One reason is that one of the "games" shown in "The Bolo Game" used to set up a Bolo Game attack is one we call "the Kalimba" in homage to the man from whom I learned it. When GT Gaje introduced me to Manong Kalimba in Bacolod in 1997 one of the conditions of the training was that I not publicly share the material until after his death. GT Gaje informed me a couple of years ago that Manong Kalimba had passed and thus this reason was no longer in play.

So why did we continue to keep the material "closed door"? The second reason is IMHO some really stellar material-- as the line from a TV western of my youth went "No brag, just fact"-- and I have wanted to keep it within the DBMA tribe to keep an advantage for us.

So what has changed?

I had only one glorious day with Manong Kalimba. As we sat during a break eating coconuts, I offered to produce a DVD of him (actually back then it would have been a video). He declined. When I asked him why, he said he would not want anyone using his techniques against him or figuring out ways to counter them.

Here in America and elsewhere in the west people tend to have no idea just how seriously secrecy is part of the culture of the Filipino Martial Arts. In the "look at me!" culture of youtube and the vast anonymity in which modern man so often lives, these ideas may seem quaint or deranged, but as time goes by I begin to appreciate just how extraordinary it has been of Top Dog to show what he personally does in our "Real Contract Stickfighting" series of so many years ago (1993 if I remember correctly) and to have remained the Top Dog with so many people studying him for all these years since then. As I have pursued my life in martial arts, I begin to appreciate the risks I have taken by having allowed people to see a portion of what I do-- for unlike Top Dog my way has been one not of physical dominance, but of craftiness.

That said, as I have spent more years in the Art, I begin to understand more about what it takes to ensure the survival and transmission of the Art's understandings and techniques. I see how much is being lost. The Art has given so much to me that I have an increasing sense of having to do what I can to contribute to its survival.

It is in this light that I worry that the current number of carriers of The Bolo Game is too small to ensure its survival and so I now let it out. In return, (in addition to the cost of the DVD) I ask that people respect the work I have put into developing this distinctive body material and act in a way that the benefit accrues to me: in other words, no copying, pirating, ripping, teaching it in seminars or DVDs, etc. Please tell me if you see someone doing any of this. With my blessings, use if for yourself, in your school-- and please say where you got it.

Although the Bolo Game is a development of mine, it builds upon a Krabi Krabong based structure that in DBMA we call "The Salty Game" because it was brought to us by Salty Dog-- a key addition being the understanding of how to make the uppercut a high percentage move in the adrenal state. This structure was then blended with the Kali triangles of the DBMA footwork matrix and the Trident Game and certain other DBMA understandings. This DVD is perhaps the most nutritionally dense one I have ever put out.

What of the advantage held by the DBMA folks that now will be diluted? Well, first of all, buying the DVD is one thing-- training it with me is another. Furthermore, just as I developed the Bolo Game, I have developed other additional advantages for the DBMA tribe. After all, I am the Crafty Dog. It is what I do. 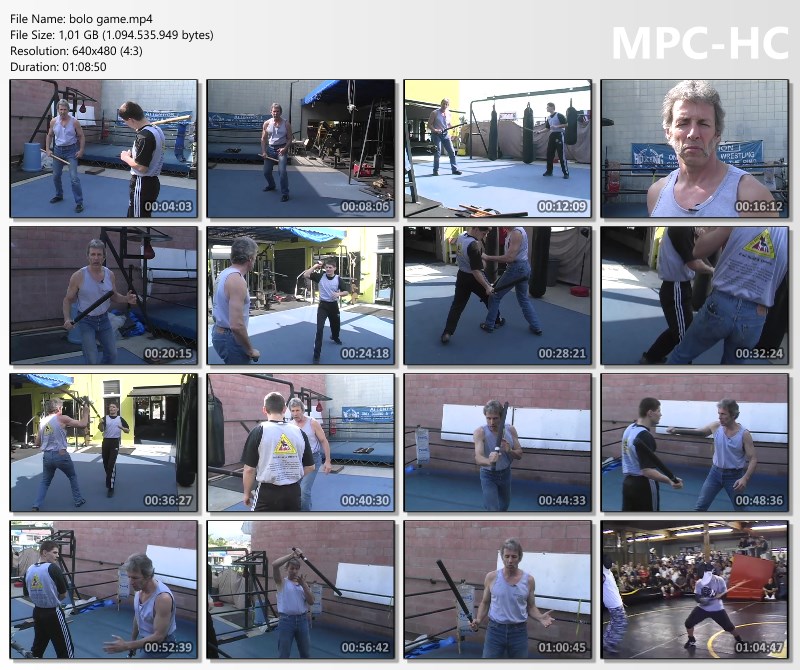