Master The Art Of Aggressive Muay Thai That Leaves Opponents Defensive And Looking For A Way Out With One FC Flyweight Muay Thai Champion, Rodtang Jitmuangnon
With almost 1000 fights, ONE FC Flyweight Muay Thai Champion Rodtang Jitmuangnon has been training since the age of 10 and claiming multiple prestigious world titles along the way
Learn aggressive muay thai strategies from Jitmuangnon that will revolutionize your entire stand up game
Check out Jitmuangnon’s essential fundamental footwork, favorite combinations, reliable defensive tactics, and more as you work through an entire blueprint of muay thai mastery
Beginning his competitive career at the age of 10, Rodtang Jitmuangnon has been a fixture in the muay thai community for several years, claiming multiple titles along the way, including the ONE FC Muay Thai Flyweight Title, MAX Muay Thai Title , and more! Known as the #1 pound for pound Muay Thai Fighter in Thailand according to The Nation, Jitmuangnon continues to turn in impressive performances and display his aggressive, menacing style at the highest levels of the sport. With Aggressive Muay Thai Mastery, you’ll get a firsthand look at the training practices, techniques, and strategies of one of the best muay thai fighters in the entire world.  In this groundbreaking instructional series, Jitmuangnon will reveal the secrets of his wildly effective game to help you revolutionize yours, so you can upgrade your muay thai toolbox and start prepping, training, and fighting like a world class athlete!
In 3-parts, Jitmuangnon will share vital techniques and strategies that have been integral in his rise to the top! Learn fundamental footwork that will help you move efficiently and attack with a higher rate of success. Master ring control concepts and use world class tactics to put pressure on your opponents as you learn to become more aggressive and menacing in the pursuit of your victories. You'll get insight into some of Jitmuangnon’s favorite combos, defensive tactics, clinch controls, and much much more in this library of muay thai secrets that will supercharge your striking game!
Nearly 1000 fights provide experience that few will ever attain and that's the source of the instruction you'll be receiving as you work through this muay thai master course! Take your striking toolbox to the next level with proven techniques that have already been tested in the fires of muay thai competition of the highest caliber!
SO, WHAT EXACTLY DO YOU GET?
PART 1
INTRO
FUNDAMENTAL FOOTWORK FOR MOVEMENT AND ATTACK
MUAY THAI COMBINATIONS AND PROPER FOOT PLACEMENT
RING CONTROL AND PRESSURING YOUR OPPONENT
KICK DEFENSE AND ATTACKING THE LEADING LEG
PART 2
OFFENSIVE CLINCHING CONTROL POSITIONS AND ENTRY
PARRYING ATTACKS AND COUNTER PUNCHES
PART 3
ELBOW STRIKE VARIANTS AND CREATING OPENINGS FOR ELBOWS
OFFENSIVE TEEPS AND PARRYING THE TEEP
SWEEPING THE LEAD ANKLE WITH FOLLOW UP ATTACKS
OUTRO 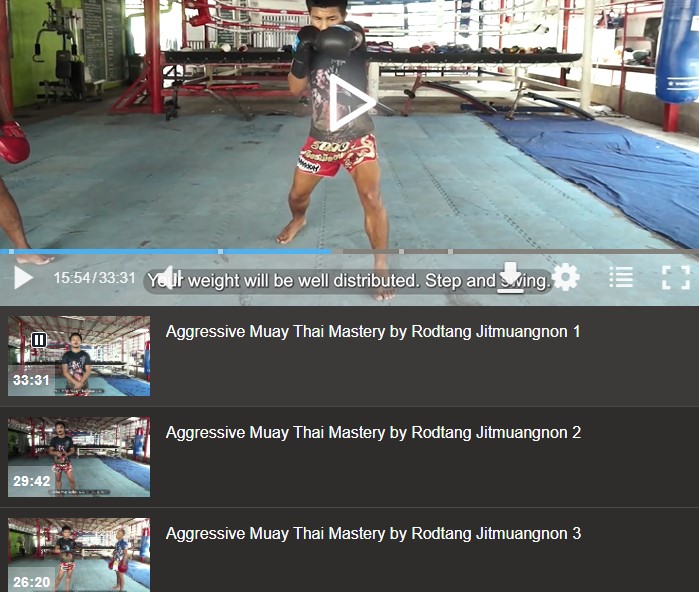