Master The Art Of “Smeshing” With The Sambo-Hybrid Fighting System Of Khabib Nurmagomedov, The Iconic Undefeated UFC Champion Who Shows How He Dominated The Field In MMA With Revolutionary Ground Skills
Learn standing techniques, control and submissions on the ground, and even some of Khabib’s revolutionary cage work on this 3-part series
See how Khabib closes distance with strikes to set up takedowns, his tips on shooting, and using single legs, body locks, and more
Dominate in the clinch with techniques for throws, trips, lifts, and more that will let you secure big takedowns
Smash the guard on the ground with pressure and Khabib’s strategy for holding position while delivering strikes, including some of his favorite submissions
See the genius cage control concepts and principles Khabib used to become the most dominant MMA fighter of all-time
In one of the most anticipated releases in BJJ Fanatics history, now you can learn from one of the most iconic champions in UFC history, as Khabib “The Eagle” Nurmagomedov shows you his system for breaking down some of the best fighters in the world with control and the “smesh”. On this three-part series, you’ll get techniques for standing, on the ground, and even against the cage that have been battle-tested at the highest levels of combat.
Join one of the best fighters of all-time as Khabib shows you how he mixes his strikes and takedowns, including some of his most memorable attacks. Shoot and score with transitions from singles to doubles, lifts and throws from the clinch, and more, each shown with the modifications and variations Khabib used in UFC action.
Khabib was legendary for his ground and cage control, and now you can get those strategies and systems from the man himself. Smash on the ground with pressure, work for dominant positions, and troubleshoot tricky situations with Khabib’s detailed coaching. Use the cage to your advantage with lessons you can’t afford to miss, including some of his most famous grappling positions like the grapevine and his signature wrist control series.
SO, WHAT EXACTLY DO YOU GET?
PART 1
INTRODUCTION
STANDING TECHNIQUES
CLOSING THE DISTANCE FOR TAKEDOWNS
MIXING YOUR STRIKES AND TAKEDOWNS
THE KNOCKDOWN AGAINST CONOR
TAKEDOWN POSTURE & PRESSURE
CONTROLLING THE HIPS
USING A BODY LOCK AGAINST THE CAGE
USING A BODY LOCK IN SPACE
SINGLE LEG TO DOUBLE LEG 1
SINGLE LEG TO DOUBLE LEG 2
LIFTING WITH THE CLINCH
FOOT SWEEP FROM THE CLINCH
HARAI GOSHI
DEFENDING THE SINGLE LEG
DUCK UNDER
PART 2
GROUND TECHNIQUES
SMASHING THE LEGS
MOUNTING
ARMBAR & BICEP SLICER FROM MOUNT
MOUNTED TRIANGLE
FINISHING THE KIMURA
PART 3
CAGE TECHNIQUES
CAGE INTRODUCTION
CONTROLLING AGAINST THE CAGE USING LEGS
CONTROLLING THE WRIST
SMASHING AGAINST THE CAGE 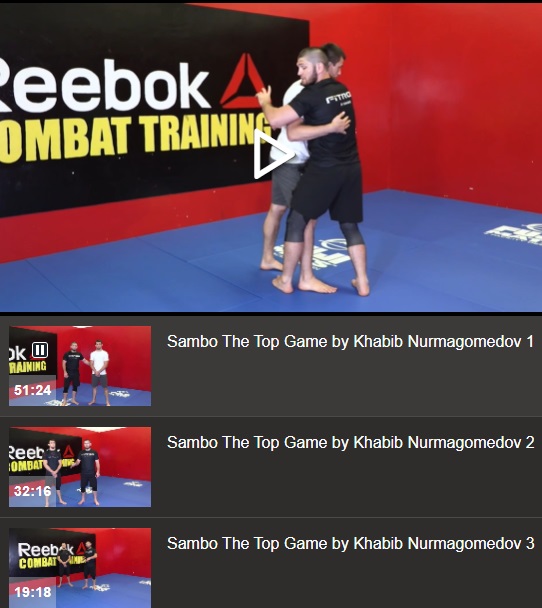